Home
>
Book Reviews
>
You Came Back 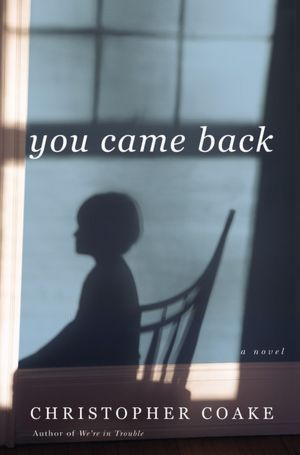 “Mark Fife was being watched. He realized this in a coffee shop three blocks from the townhouse where he and his girlfriend, Allison, lived, sitting in a stuffed chair with his back to the front window… Allison had left Mark alone to use the restroom, and he was pretending to read the Dispatch while he waited. And then came the prickle at his neck, the sudden shock – as though a sly lover had drawn the tip of a fingernail across the short hairs of his nape. He lifted his eyes from the paper and scanned the shop, but no one was looking his way. “

You Came Back
By Christopher Coake

It’s been seven years since the death of Mark’s little boy, Brendan. In that time Mark’s marriage fell apart and he almost didn’t survive his own grief. Mark spent too many days and months blaming himself for Brendan’s death and turning to alcohol to numb his pain and while his grief is still a part of him, his life has turned around somewhat. He has a new relationship which is going well and he’s managed to work out his relationship with his ex-wife to where they have become friends but then Connie Pelham finds him.

Connie and her son are living in Mark and Chloe’s old house she is desperate to get in touch with them because Connie believes Brendan’s ghost is still in the house and wants to communicate with Mark and Chloe.  Needless to say her first attempt at approaching Mark doesn’t go over too well but she persists.

Mark has always been a skeptic and doesn’t believe Connie but her insistence is hard to ignore and he still feels a deep sense of responsibility for Brendan’s death so once again Mark finds that he can’t move on in life. Grief is consuming him and how can he fail Chloe and Brendan again? Is Brendan really in the house waiting for his parents?

Going into this book I thought I was in for a ghost story or a supernatural thriller but instead it was a story about love and grief. Grief can be all consuming for some, destructive for others and a veritable merry-go-round where you feel like you keep going over the same thoughts, same actions and no one understands. I felt like the author captured this messy cycle so well.