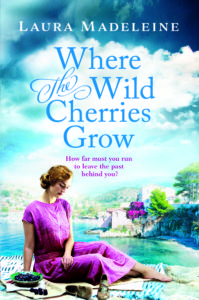 “The path twisted, taking us high above the dark waves. Finally, I felt grass beneath my feet, smelled sweetness upon the air and we emerged on to a tiny plateau beneath the brow of the cliff. Here, a single, twisted tree was growing: a wild cherry, its fruit flushed pink. The forbidding rock walls shelter it from the winds, like a fierce creature guarding something precious.”

For the young solicitor, Bill Perch, the task to find a long lost great-aunt for a wealthy family could mean that his boss finally will give him a more important role in the firm and he can just see his career growing. Once at the abandoned family home he finds Emeline Vale’s diary and after reading it he wants to find Emeline but not necessarily for the same reasons as the family.

In Emeline’s diary written in 1919, Bill finds that she was a young woman trying to do what was right for her young brother. They had lost their mother and the great war had taken many of their loved ones but Emeline was not about to be pushed into marriage and give up her family home so she runs away to France.

As Bill continues to read her diary he realizes he cares about finding what happened to Emeline but he’s not so sure on how he feels about reporting his findings to his employer. He feels like has to protect Emeline from her family.

The story is told from Emeline’s and Bill’s viewpoint. I enjoyed seeing Emeline fight for her independence and survival as she enters France and assumes a new identity. Of course Bill is learning about making his way in life and how sometimes you have to stand up for what you believe in.

This was a really sweet read and I enjoyed both timeframes and characters. It was a feel good story with just the right elements of romance, drama and even a bit of mystery and all set in the historical backdrops of 1919 and 1969.