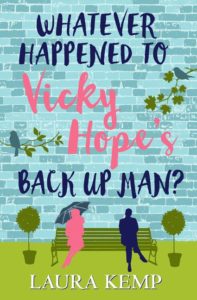 “If only Mikey was coming, he always made her feel special. Sort of interesting, funny, clever, kind and not the big idiot she considered herself to be. Oh God, she thought, shutting her eyes, she was going to miss him madly. He was her constant, her ally and her teammate – even more so than Kat…”

Whatever Happened to Vicky Hope’s Back Up Man?
By Laura Kemp

Vicky, Kat and Mikey were the best of mates until Vicky and Kat went away to travel the world. Before she left though, Vicky made Mikey promise that they’d end up together if when they turned 30 they were still single.

Now Vicky who was expecting a proposal from her flighty boyfriend Jez, realizes that he wants to end things and she’s on her way back to her small hometown, her parent’s home and to wondering what happened to her best friends. She decides she needs to find a job to keep her sanity and to find what happened to Kat and Mikey.

While it’s been eight years since the friends have seen each other, when Vicky and Kat meet up although they are tentative around each other, it’s like they’ve never been apart. Vicky realizes that Kat’s life hasn’t turned out how they expected either. She’s not the high powered lawyer but instead is in a nearby town and about to marry.

Unfortunately it’s going to be harder to patch things up with Mikey. He now goes by Murphy and isn’t quite so geeky any more. Actually it seems that he’s the one that made something big out of his life but when he sees Vicky he is reminded about their past and just how much her and her family helped him through his family drama.

There were a lot of misunderstandings between the friends but can time heal all wounds? With flashbacks for the three characters we find out what made them change. Big secrets, romance and two characters (Vicky and Mikey) who really had me rooting for them. A fun, light-hearted modern romance novel.