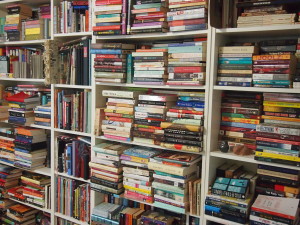 What a weekend right? I just want to say thank you to all of my friends and all of you who were able to go to the Women’s March. I was not able to join the Austin event but I have to say seeing images on television, Facebook, etc. of all the events was really moving.

I did surround myself with books this weekend of course. I made a bit of progress in some of the current reads I had mentioned a couple of weeks ago but I have since added a few other books and wanted to mention those.

First, is One Secret Thing by Sharon Olds. In my effort to read more poetry this year I’m trying to branch out into poets I haven’t read a lot from and Sharon Olds is one of them. I’ve made it about halfway through this collection and some of the poems have felt very raw and personal, which I guess a lot of poetry does feel that way. But there are poems that touch on war and family conflict. Neither of those topics is easy right?

Next up is Daisy In Chains by Sharon Bolton. A thriller about a serial killer in prison who claims to be innocent, of course. He reaches out to Maggie Rose a no nonsense attorney and writer for help. Oh this is such a good thriller but I expected no less from this writer whose other books I’ve enjoyed.

The Reactive by Masande Ntshanga. This is such a grim look at the life of three friends in South Africa. They spend their days getting high while one of them, Lindanathi, looks back on the death of his brother and navigates his own illness. He is HIV positive. While this may not be an easy book to read because of the subject matter I’m glad I’m reading it. I feel like I’m seeing a whole new world.

So those are my new reads. What about you, did you start any new books this weekend?

Now off to get back to some reading and preparing for the week ahead. Have a great start of the week!