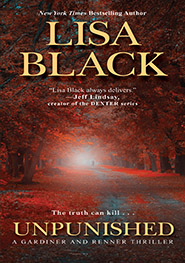 “The kid stared at the one-way glass in front of him as if checking out his haircut, supremely unconcerned by the cops on either side of him. But his unnatural stillness told Jack that he was all too aware; his muscles tensed a little more with every inch closer Jack came. The instinctual recognition of one predator for another.”

In this sequel to That Darkness Maggie Gardiner, a forensic investigator for the Cleveland Police Department, is called to the Cleveland Herald when a body is discovered in the newspaper’s assembly line. Maggie quickly realizes that this was not a simple accident and the victim was murdered.

So once again Maggie’s path will cross with homicide detective Jack Renner. In the last installment Maggie had just found out that Jack is hiding a very dark secret. He’s the one who’s been acting as a vigilante in the area and killing off criminals who have committed murder.

Somehow now Maggie has become an accomplice in that she still hasn’t said anything about Renner and now has to work with him. Jack doesn’t know how much he can trust Maggie and he thinks it might be just a matter of time before she says something. But first, they have a murder to solve.

What are the editor and investors at the newspaper hiding and why are they finding more bodies? So while there is an interesting mystery to solve and I find the dynamics between Maggie and Jack fascinating. All of the tension was lost when there was so much emphasis on today’s status of the newspaper industry. It’s no secret that newspapers are closing thanks to digital media and the fast pace of news but it seems like most of this story is spent on that rather than solving the mystery and our two main characters.

I do have the next book in the series waiting for me and I hope this next installment will be a bit more like the first book. I want to know what will happen between Maggie and Jack and if they end up forming a closer alliance or will one day Jack be on the run. Lots of great material and hopefully more will be explored in the next book.