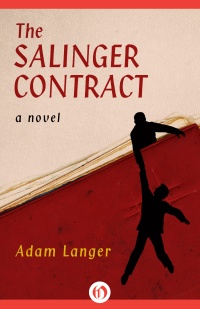 “I never believed a book could save your life. It makes sense that Conner Joyce would be the one who changed my mind about that. The story of how one book saved me while another nearly killed Conner began, appropriately enough, in a bookstore – to be more precise, at Borders in Bloomington, Indiana, where I saw a poster with Conner’s picture on it. By then, I had nearly forgotten Conner. I had figured I was done with books.”

The Salinger Contract
By Adam Langer

Ever since the demise of the literary magazine Adam Langer worked at he’s been a stay-at-home dad trying to work on his next book. And, yes, the main character shares the name with the author which is something that normally bugs me a lot but in this case it totally worked.

Anyway, one day while at a Borders Bookstore Adam sees that Conner Joyce, a writer he once interviewed, is doing a book signing but rather than it being a literary crush with many fans the once up-and-coming writer only has a handful of members in the audience. Adam is about to walk off when Conner recognizes him and before he knows it he is drawn into uneasy friendship.

Conner explains that he is involved in something so big but that he can’t let anyone know. Slowly the details emerge and Adam learns that Conner has entered a most unusual book contract. He is to write a book for one person. A book so great, a book that will bring him so much money to end all his money woes, but it will only be read by one man.

I really enjoyed this book. It had a bit of everything from observations on the world of book publishing, the demise of bookstores and even a bit on the world of academia. I particularly liked one character who was such an over-the-top author that I couldn’t help but laugh. Another highlight was that it was so fun to revisit Borders even if it was just through the pages of a book. For fans of books about books you should check this one out.