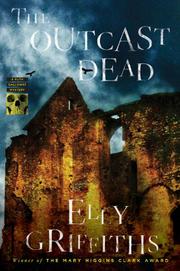 “But she approves of the Payers for the Outcast Dead. This brief ecumenical service is held every year for the unknown dead of Norwich: the bodies thrown into unmarked graves, the paupers, the plague victims, forgotten, unmourned, except by this motley collection of archaeologists, historians and sundry hangers-on.”

The Outcast Dead
By Elly Griffiths

As a forensic archeologist, Ruth Galloway’s latest project is a dig in Norwich Castle. There she uncovers the bones of Mother Hook, a notorious woman convicted of killing five children in 1867. This calls the attention of a popular television series Women Who Kill and Ruth reluctantly accepts to be involved in sharing Mother Hook’s story.

As Ruth delves deeper into the story she begins to wonder if the Jemima Green (Mother Hook) was unjustly accused and her only crime was loving the children she was caring for. Meanwhile, DCI Harry Nelson is also involved in a modern day case of a child’s death. Is the mother guilty or was it just a tragedy?

The author weaves the two mysteries and brings Ruth and Harry together to help solve the cases. As usual, Ruth and Harry’s relationship is complicated. He is married and is not planning to leave his wife but is he comfortable with Ruth moving on?

The resolution seemed a bit rushed and there was a major lapse in judgment that I can’t believe Ruth would have made but that aside I loved reading about Cathbad, Ruth’s druid friend, and the Saltmarsh where Ruth lives.  I also see some progression in the series which is something that makes me keep coming back to see what happens next.