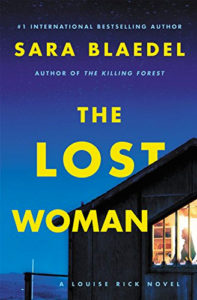 “Limbs snap under his feet as he wrestles his way deeper into the underbrush. Twilight closes in around him, as water from the drizzling rain runs of his leather jacket. Lights are on in the kitchen and in a few rooms toward the back of the house. He sees her through the window, standing at the sink in the warm light, her hands busy under the running water.”

The Lost Woman
By Sara Blaedel

Sofie Parker is in the kitchen with her family, unbeknownst to her, someone is outside in the dark, watching and waiting to shoot her. The family is shocked by the violent murder and police quickly discover that Sofie is actually a Danish citizen who was reported missing in Denmark.

Back in Copenhagen Louise Rick, head of the Special Search Agency, is desperately searching for her partner Eik who seems to have disappeared. Soon she finds out that Eik headed to England upon hearing the news about Sofie.

Louise will have to follow up and find out what led Sofie to England and why she remained hidden for so long. As she uncovers the truth, she learns that the death of Sofie’s mom is why she left Denmark.. Unfortunately there are those who never understood Sofie’s part in her mother’s death and now someone else could be in danger.

If you’ve not read any other books in the series, I think the author does a good job of filing you in on the backstory of the characters. I found that the mystery was almost secondary to issue of assisted suicide that the writer tackles in this entry.

Sometimes I found Eik’s character a bit too naive and reckless but Louise’s character is solid and feels all too real. A woman, trying to make a go of a relationship while balancing a career and home life. Count me in on wanting to read more of this series.