Home
>
Book Reviews
>
The House of the Vestals 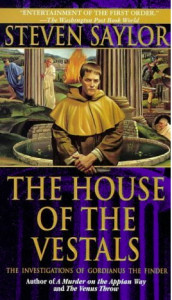 “It was the Ides of September, and a more beautiful autumn day the gods had never fashioned. The sun shone warmly on the narrow streets and gurgling fountains of Rome.”

The House of the Vestals
By Steven Saylor

This short story collection featuring Gordianus the Finder are meant to fill the void in time between the first and second books featuring the character. Fans of the Roma Sub Rosa series, now up to 15 books, wanted to know what Gordianus did in the interim.

Gordianus is a Finder – Ancient Rome’s equivalent of a private eye. He can find secrets and keep them too. In each of these nine stories he’ll often have help in solving the mysteries from his beautiful wife, Bethesda and/or his adopted son, Eco. His friend Lucius Claudius often makes an appearance and paves the way for Gordianus to meet more influential or richer members of the Roman society.

Some of the stories are humorous and some make you think how wonderful that we no longer live in Roman times. More than the mysteries, what was interesting about this collection was the timeframe. The author doesn’t try to make the give us modern characters set in ancient times and I can appreciate that.

Perhaps the highlight of the stories is the description of festivals, of rituals and other activities that were important in Roman life.One of my favorite stories was “The Disappearance of the Saturnalia Silver” in which the slaves of the households are given a free day and some are even allowed to speak their minds freely. There is a lot of merrymaking and room for mischief of course which is what happens in this story.

While I typically prefer to read mysteries in order I found that these short stories gave me an idea of what to expect from the series as a whole and it’s one I wouldn’t mind revisiting.