Home > Nightstand > The Girl On The Train 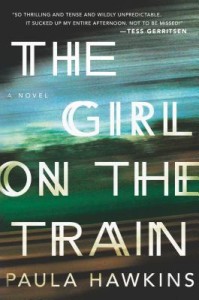 “My head leaning against the carriage window, I watch these houses roll past me like a tracking shot in a film. I see them as others do not; even their owners probably don’t see them from this perspective. Twice a day, I am offered a view into other lives, just for a moment. There’s something comforting about the sight of strangers safe at home.”

The Girl On The Train
By Paula Hawkins

My mystery book group met last night to discuss The Girl On The Train by Paula Hawkins. I was initially a bit set against this book I admit because off all the hype. I previously mentioned that my library had some 90+ holds on this book. And, of course there were all the comparisons of if you loved Gone Girl, you’ll love this book.

Oddly enough, I managed to not read too many reviews about this book so I didn’t know much about the plot. I didn’t even realize this was not set in the States. So once I started reading I found myself sucked into the story.

Three women, Rachel, Anna and Megan are at the center of the story with Rachel being the girl on the train who is not the most reliable of narrators given that she is an alcoholic and in an extremely emotional state after her marriage has come crumbling down. She invents lives for people she doesn’t know, and she is practically inventing a life for her between all the lies she tells.

Still while she’s facing such a terrible time, I found it hard to think of her as a sympathetic character. Most characters in this book aren’t very likable and perhaps that was the intent so as to create characters that you would think could be capable of anything in the right circumstances.

The thing that I found most interesting among our group was that the men didn’t like this novel very much while the women did. So yes, while I wasn’t too keen on reading this book in the end I liked it a lot. I wasn’t surprised by the ending necessarily but I liked the uncertainty I felt about events and characters while I was reading it. Have you read this? What did you think?