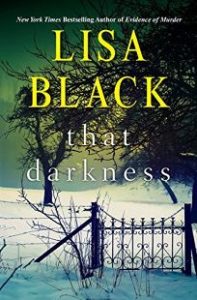 “Jack Renner knew about the cat. He knew about Brian beating his ouster mother with a golf club in the sixth grade. He knew about the man’s recruiting method, his ways of increasing territory, how his guys branched out into armed robbery and home invasions when the local economy tightened up. He knew because he had read every form, every note, and every report written on Brian Johnson.”

That Darkness
By Lisa Black

Maggie Gardiner is a forensic investigator for the Cleveland Police Department. When the body of a young girl is found in a cemetery, Maggie is called to help find out who did this. It bothers her that there are little clues but she is determined to find out who killed her. At the same time she’s also working some other cases that share some striking similarities and she beings to wonder if there is a serial killer at work.

What Maggie doesn’t know is the officer who is working with her, Jack Renner, is a killer. He doesn’t kill innocent people, but those who have not been punished for their crimes. If you are thinking doesn’t this sound like the character of Dexter from the Lindsey novels, then yes there is some of that but Jack Renner is his own character.

As this is the first book in the series it is still too early to really get to know what brought Jack Renner to this point in his life and how he’s managed to avoid capture for so long. I liked Maggie’s stubbornness and found that Maggie and Jack were well matched characters. They are both smart and feel the need for justice, they just have different ways of pursuing it. Can Jack keep working with Maggie and after what she’s learned of him how does that reconcile with her feelings on justice.

I especially enjoyed seeing how page after page Maggie is getting closer to the truth and Jack is barely able to keep ahead of her. Despite what Jack does I really liked his character and I am anxiously waiting to see how the two will work in the sequel. I think there’s a lot of potential here for a great new series.