We’ve been having a very good weekend so far even if some of our plans haven’t panned out. Saturday we wanted to test out some new photograph equipment so we thought we’d go to some Austin sites and our first stop was the Austin Museum of Art Laguna Gloria extension.

Unfortunately we had only been there a short while taking pictures of the grounds when it started pouring. We stood underneath the covered porch of the vila and watched boats on Lake Austin for a while. It was actually still pretty though so despite not being able to take many pictures it was nice to hang out there for a while. 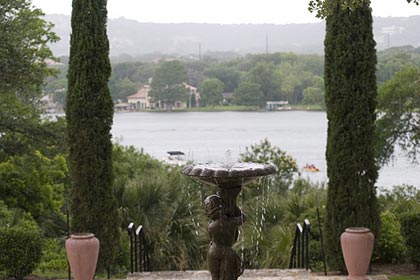 After the rain stopped a bit we headed back to the car and drove on to see some art exhibits. One was at the Carver Branch library but unfortunately we didn’t realize the library was going to be closed on the weekend for the Memorial Day holiday. Ah well, but I must say I have to go back to this branch. Isn’t this library cool? Love the mural. 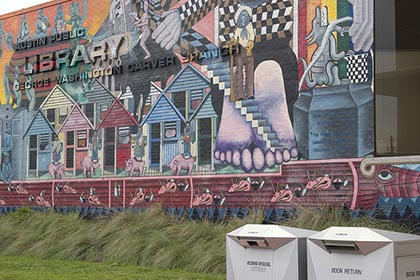 We did get to see one art exhibit at Flatbed Press, met some friends and overall had a very good day.

The day was of course made complete by spending an evening at Borders. I got to use my 40% off coupon and bought Bloody Good by Georgia Evans because I couldn’t resist that cover. So far it’s a good little mystery. My reading has me quite settled in England during the 1940s as my other read is The Slaves of Solitude by Patrick Hamilton which I’m reading for the Slaves of Golconda discussion coming up at the end of the month.

I hope everyone has a great start of the week!