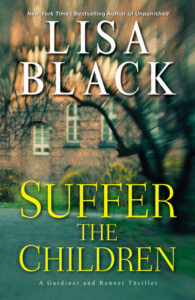 “Maggie Gardiner stood with a camera in one hand and a crime scene kit in the other, surveying the lifeless body and the hallway around it. Simple, as crime scenes went. No furniture, no wet grass or old clothes, no useless debris to be sorted from vital clues. Empty steps and what remained of a child who had suffered the misfortune to land on her head instead of her feet.”

Forensic expert, Maggie Gardiner, is called to Firebird, a secure facility for juvenile offenders in Cleveland after one of the residents is found dead. Rachel was a 15-year-old girl with behavioral issues but Maggie is there to find out if this was an accident or foul play. Homicide detective Jack Renner is also on the scene to conduct the investigation.

While conducting interviews with some of the people that came in contact with Rachel, they realize that despite the reason why the juveniles are at Firebird, they are also victims themselves of the system that didn’t help them. Most of the kids were in abusive situations and have repeated the pattern of abuse.

Despite Firebird being a secure facility and the staff having set up a system where the kids can’t move about freely, another death is reported and even Maggie and Jack are attacked by one of the children. No matter, Maggie is determined to see through the investigation and find out who was responsible.

Meanwhile while all of this is going on, Maggie’s ex-husband thinks he know who Jack Renner really is. Jack can’t afford to have the truth come out about his background and at this point neither can Maggie. As usual, the author does a great job of setting up the details involving the crime. These two are becoming my favorite duo in a mystery series but there is the issue of Jack’s past. This is the fourth book in the series and while you could certainly read on its own, I highly recommend you start from the beginning. Now, I’m looking forward to the next one.