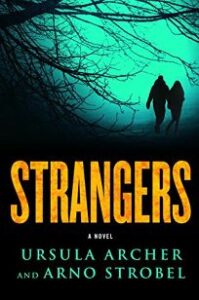 “A burglar would run away now, but the stranger doesn’t do that, and something inside me has already figured out that the man hasn’t broken in here to rob me. No thief wears a suit when he’s breaking into a house. But that means there’s another reason, that the stranger has a different intuition … and this thought awakens a completely new kind of fear within me.”

Joanna is blow drying her hair when she notices the motion sensor light going off outside her window but she’s not expecting company. She continues with her routine but slowly begins to feel uneasy but as she’s thinking of preparing some tea to soothe her nerves, she’s hears a noise from inside the house.

She goes downstairs, still hearing some sounds coming through but arms herself with courage and a paperweight when all of a sudden she sees a man in her house. She begs him not to hurt her and at the same time she’s confused as to why this well dressed man would be in her home. She tells him she won’t call the police and it’s only when he says her name that she realizes he must know her but she doesn’t recognize him. Finally, she sees he’s starting to react to her words but instead of asking for money, valuables or something else, he’s asking her to reason with him because he’s her fiancé and they live together.

Erik is just as confused as Joanna. He’s trying to make her understand that they are a couple but when he calms her down and thinks of ways to show her they live together, he realizes something is seriously wrong. It’s like there is no trace of him at their apartment.

As time passes and both stand by their stories, they come to the uneasy realization that something big is going on and they are caught up in grander scheme but who do they need protection from and who can help them?

Told in alternating chapters between Joanna and Erik’s viewpoint I thought the authors did a good job of showing the confusion both characters are experiencing. The best part of the book for me was the middle when I felt like I was racing through with them to figure out what is going on all leading to a conclusion that was a bit over the top but fun nonetheless.