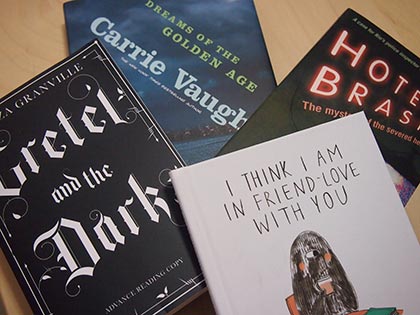 As I mentioned in my previous post I have some new Advance Review Copies that I’m excited about. I haven’t been requesting many books because honestly between my endless stacks and library books, I don’t know when I’ll read these but it is a nice surprise to get ARCs isn’t it?

The first one is I think I Am In Friend Love With You by Yumi Sakugawa. This slim little book is a graphic novel celebrating friendship.

Next up is Hotel Brasil by Frei Betto. Published by Bitter Lemon Press, this is a crime novel set in Rio de Janeiro. The only Brazilian writer I’ve read before is Paulo Coehlo and this sounds completely different from his style so I’m excited to read this book.

Then it’s Gretel and the Dark by Eliza Granville. Isn’t the cover great? I love the Fraktur font and think it was probably a good choice for a story set in 1899 Vienna. Psychoanalyst Josef Breuer is investigating the case of a girl who insists she is a machine.

Finally, Dreams Of the Golden Age by Carrie Vaughn. Is the story about a teen with a telepath for a father and superheroes for grandparents but Anna has secrets of her own. This is actually a sequel so I’m going to have to read After the Golden Age first.

Let me know if you’ve read some of these and what you thought! What about you, have you received an ARC you are excited about?