Home > Nightstand > Scenes From The Netherlands

We spent nine fun days in The Netherlands on our vacation. For the most part good weather, and we rented an apartment in Utrecht. We were near the city center so every day we walked along the canals whether we were wandering around or even when we went to the train station to go somewhere else.

We made day trips to Gouda, Rotterdam and The Hague. We could have squeezed in another city but it was nice to have some downtime and not be in a rush all the time. We had been to Amsterdam years ago so it was nice to return and see more of Holland. 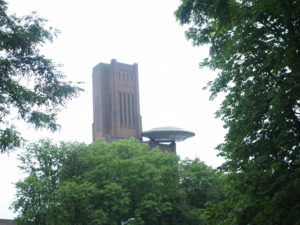 In Utrecht not only did we see beautiful Dutch houses and lots of cyclists we even saw a UFO. I believe the UFO was part of an art installation from some years ago. While we wished we could have biked, actually our trip to the Netherlands was supposed to be a bike tour but train tickets for our bikes were sold out from Germany to Utrecht, I still felt like every time we walked towards the city center there was something new to look at. We could have rented bikes while we were there but we decided we could do that another time. Yes, I’m sure we’ll go back to

Some of the highlights for me of Utrecht was finding MegaCarta. This great shop sold vintage postcards. I had to buy a couple. Sipping cappuccino at CoffeeCompany. Walking around the Dom tower and just looking at the beautiful buildings. 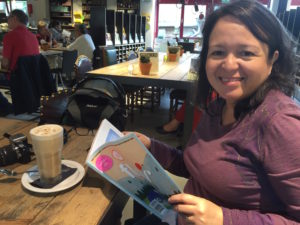 A short train ride away and we were in Gouda for a day. This charming city is of course known for its famous cheese, which we did sample, but I fell in love with the Chocolade Fabriek. A chocolate factory you say? Actually this now defunct chocolate factory is home to the city library. We went in to take a break from all the walking around and guess what I found on the shelves? Flow Magazine. So here I sit with the original Flow (in Dutch) mainly looking at the pictures but really enjoying my surroundings. They have a café in this wonderful library and they also had a large selection of English language books.