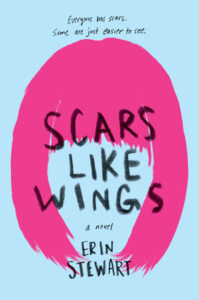 “One year after the fire, my doctor removes my mask and tells me to get a life. He doesn’t use those exact words, of course, because he’s paid to flash around lots of medical-degree terms like reintegration and isolation, but basically, the Committee on Ava’s Life had a big meeting and decided I have wallowed long enough. My postern pity party is over.”

Ava has spent the last year trying to adjust to her new reality. Her parents and cousin died in a home fire and she was left with noticeable scars. She now lives with her uncle and aunt and would like nothing more than to just retreat into her world but the adults have decided it’s time to give school a try and start living again.

Ava agrees to go back to school for two weeks. Surely that will satisfy them and she can show them it’s not that easy and it’s better to stay home. Any new school is hard for a teenager but for Ava she just knows it will be torture. That is until she meets a feisty girl in a wheelchair, Piper, who is also a burn survivor.

Pretty soon Ava is dealing with the typical teenager angst type things like mean girls, starting to have feelings for a boy, and realizing that everyone wants to fit in. It’s when she joins the theater group that she feels a bit like she could capture some of her old life. Maybe this time it will be behind the curtains but she’ll give it a try.

This was such a good book. It was funny and emotional. I felt so sad for the trauma Ava had to go through as well as Piper who eventually shares what happened to her. I loved the friendship that developed between the two girls and how they learned to be there for one another. Yes, the book did manage to make me teary at one point but I dare you not to get teary-eyed when you read this one. I hope you’ll check it out.