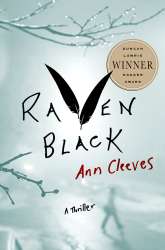 “Twenty past one in the morning on New Year’s Day. Magnus knew the time because of the fat clock, his mother’s clock, which squatted on the shelf over the fire. In the corner the raven in the wicker cage muttered and croaked in its sleep. Magnus waited.”

I originally read this book in 2007 and even though I normally don’t re-read books had to read this one again as my mystery book group discussed it last week. It was a fast read as a lot of it came back to me as I was reading. I remembered whodunit so I was able to focus instead on how the author got to the reveal. Did it make sense? Should I have seen the clues? I think so. I still enjoyed the novel but the one thing that I kept thinking about was how Detective Jimmy Perez doesn’t seem as strong a character as he should be or what I would expect him to be for someone in his position. Funny, as I read my review from 2007, it looks like I kind of had the same thought then. Anyway, below is my original review:

The novel opens with two teenagers traipsing through the snow covered countryside in the middle of the night after coming home from a party but instead of going home they find themselves near the house of Magnus Tait, a strange and lonely man. One of the girls dares the other to knock on the old man’s door and so the girls find themselves inside the house and sharing a bit of drink to welcome the New Year.

A few days later the body of Catherine Ross will be discovered in the snow. If it hadn’t been for the red scarf and the ravens pecking around her Fran Hunter, a local artist, would have missed the body. The police and locals think this is an open and shut case after all Magnus Tait had been accused of the unsolved murder of a child several years back, but Inspector Jimmy Perez doesn’t think the case is all that simple.

Inspector Perez begins to look for clues by questioning Catherine’s only friend, Sally Henry, daughter of a village school teacher. Sally had been a bit miserable with her life, not pretty enough or thin enough but with Catherine she had found somewhat of a friend. Still as Sally tells Perez about her he realizes Catherine could be cold and calculating. So there was plenty of motive but who could have killed her?

There are lots of clues in this novel and I had to keep guessing but I think the writer does a wonderful job of fleshing out all the characters and making the reader wonder about their motives. There is Fran who not only found Catherine’s body but later on makes another grisly discovery, Fran’s ex-husband who is a bit of a Player and always has lavish parties and the list goes on.

Perhaps the one thing that I realized at the end of the book is that Inspector Jimmy Perez is the least noticeable of characters. He is competent and likable but it almost seems like he isn’t in control of the scene. It is the other characters who are leading the reader up to the big reveal.