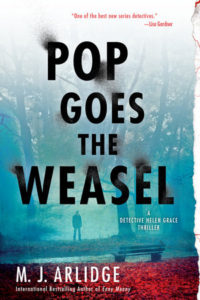 “The fog crept in from the sea, suffocating the city. It descended like an invading army, consuming landmarks, choking out the moonlight, rendering Southampton a strange and unnerving place.”

Following up on the gripping debut of Detective Helen Grace, this sequel brings back the police team from the aftermath of what happened in the first book. Detective Grace and her team dealt with a serial killer that left them all scared in many ways and the events in this book will force each one to take a look at their future.

While the team also has to learn to work together again and trust one another, there isn’t much time to spend on that as they are once again looking at another serial killer. A body is found with its heart cut out and that has been left for the man’s family to discover. As more bodies are found, it is apparent that killings are being made by a prostitute taking her revenge on her customers.

Add to the intense chase to find a killer, Detective Grace also has some personal issues to resolve. She’s trying to guide her nephew into leading a productive life, without him knowing who she is and his background, but things go awry.

A lot of this story is a follow up to the first in the series and while this book could be read as a standalone I would encourage you to pick up the first book. Both were fast paced novels that have shocking crimes and perpetrators but throughout the series Detective Helen Grace is quite an interesting character. She’s flawed, makes a lot of judgment mistakes and yet, you do want to see her succeed and hopefully learn that she can’t work cases alone. These are dark thrillers but fast-paced and they kept me turning pages to see what next.