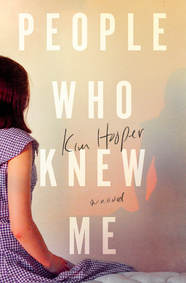 “I’d cried all my tears in the days leading up to the decision to leave. Tears for love lost when the buildings fell, tears for necessary choices, and tears for me — because, after all, I had died.”

People Who Knew Me
By Kim Hooper

Has life ever gotten so complicated and overwhelming that you just want to pick up and restart your life elsewhere? That’s exactly what Emily had to do when the demands of adulthood became too much for her. Emily fled her life in New York right after 9/11 and now fourteen years later she has to reconnect with the past she left behind.

Told through flashbacks Emily, or Connie as she’s now called, explains what led to her making such a drastic decision. At one time she was a young and hopeful college student. She was excited about meeting Drew and falling in love and planning for the future. The young couple had to deal with financial hardship and the family obligations that put a significant strain on their relationship.

Emily begins to resent Drew and she spends more time at work, more time on her career and eventually falling in love with someone else. Before she can decide what to do 9/11 happens and she decides to just escape life and forms a new life for her and her daughter in California. As far away from New York as possible.

She has made a life with little connections in California but she is content. She was able to start over and that is all she wanted until one day she receives news that will mean she has to go back to her past.

Whether you agree with Emily’s actions or not, this was a wonderful debut novel. She made decisions that not only affected her but others close to her and she didn’t give them a choice. However, can there be an excuse when one is driven to the brink? This would be an excellent book to discuss in a group setting. I’ll be eager to see what this author will write next.