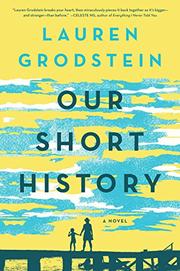 “I still have time, Jake, and I still like putting down words on paper. So I’ve decided to write a book for you, with chapters, a title, maybe even an appendix of photographs. It seems like the right way to tell you everything I want you to know… And there’s so much I want to tell you.”

Our Short History
By Lauren Grodstein

How do you tell your small child how much you love them and all you want them to know about your history, their family history and how to navigate growing up? That’s the hard task Karen Neulander has before her. She’s been a political campaign manager, raised her only son by herself and through it all she’s been a strong, fearless woman but she’s facing terminal cancer and there is just so much she still has to do.

This novel is her letter to her child explaining her background, how she fell in love with his father and how unfortunately things didn’t work out between them. Along with writing her book for Jake she’s also preparing Jake for what happens when she’s gone. She’s trying to build a strong relationship for Jake and her sister and her children so that Jake will always feel like he has a family. She hangs on to some slim hope that she’s holding her cancer at bay but the monster is always there.

Karen has been prepared for everything except for Jake’s request to meet his dad. He was the love of her life but when she told him she was pregnant, he said he wasn’t ready. Karen was not one to beg and so she moved on and now that her son wants to meet his father she is angry that all of a sudden a man who didn’t want a son will get to meet this wonderful boy of hers.

At times Karen seems a bit unhinged when it comes to how she deals to her ex-boyfriend and her son’s budding relationship but I think I understand. Everywhere she turns, she feels like her world is changing too fast and she has no control.  The same can also be said for Jake, at six years old, he is still a child and his behavior sometimes feels even feels like that of a younger child but to me that felt real.

Is the story a bit predictable? Well, in some ways yes, but nevertheless I really found it moving and I liked the characters with all of their flaws and good qualities. I couldn’t stop reading this one and actually really loved the ending.