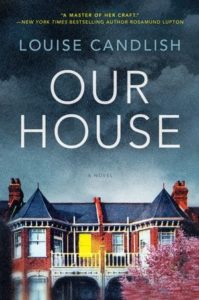 “She must be mistaken, but it looks exactly as if someone is moving into her house. The van is parked halfway down Trinity Avenue, its square mouth agape, a large piece of furniture sliding down the ribbed metal tongue. Fi watches, squinting into the buttery sunlight – rare for the time of year, a gift – as the object is borne shoulder high by two men through the gate and down the path.”

As Fiona “Fi” comes up to her house she notices a moving van and strangers moving furniture into her house. That can’t be right, she wasn’t expecting any furniture deliveries but as she enters her home she realizes it’s not one object but a new family moving into her home. How can this be?

The couple who believe they are the new owners don’t understand what is going on but they have all the documents and are trying to help calm down Fi. She’s trying to locate her estranged husband and her children but she can’t get a hold of Bram and it looks like the set up she had with Bram, just like their marriage was all based on lies.

Fiona’s marriage to Bram was pretty much over when she caught him cheating on her in their garden. Their boys asleep inside the house. That was too much but rather than disrupt the children’s lives they come to an accord, the Bird’s Nest. She’ll stay with the boys during the week and Bram can stay with them during the weekends. Meanwhile whoever is not at the Bird’s Nest, is staying at the Baby Deco, a cozy apartment nearby.

What Fi never knew was that all the while she was trying to move on with her life, even attempting a new relationship, Bram had some serious issues he had been covering up. From losing his driver’s license to other greater misdeeds which he is trying to stay ahead of by lying to everyone around him.

The story is split between Fi’s account and Bram’s narrative he’s put to paper. Will they get a chance to make amends to those they’ve hurt or will neither one escape unharmed by all the lies?

I enjoyed the double-narrative because I got to see the action as it developed based on the other’s viewpoint. While I felt for Fiona and the mess Bram created for their family, I also was so upset about Bram. He was a character he wasn’t coming to terms with the consequences of his bad decisions. Definitely suspenseful because you want to know how this will be resolved and definitely shocked by the ending. I do recommend this if you enjoy domestic thrillers.