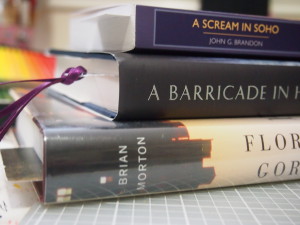 I think I have started off the year with some very good reads so I hope that’s a sign of books to come! I’ve already finished one book this year and will tell you more about it soon but for now let’s go over what’s on my nightstand.

The first book I started this year is Florence Gordon by Brian Morton. Florence is one of those larger-than-life type personalities. She’s got strong opinions on things and isn’t shy about telling you what she thinks. She’s paved the way for other feminists and scholars but her carefully constructed life is a bit upset now that she is finding fame and some of her family members are wandering back into her daily life.

What I like about this book so far are Florence’s strengths. Just because she’s a woman in her 70s doesn’t mean that now she is just thrust in the role of a grandmother. She’s still making waves and doing things on her terms. Go, Florence!

Next up is A Barricade in Hell by Jaime Lee Moyer. When I read the first entry in this series I thought it had some flaws but a lot of potential and so far this book is proving that. The atmosphere feels much more somber, as it should as the main character sees ghosts, and there doesn’t seem to be a rush to introduce characters and set up the back story.

Something must be working very well in this one because I was reading it right before sleep one night and had some very odd dreams about ghosts and such. Might be putting this off for a morning read instead.

My other read is A Scream In Soho by John G. Brandon. This is from the British Library Crime Classic collection and it’s set in London during WWII. As the title states a scream pierces the night in Soho and so the mystery begins. Detective Inspector MacCarthy is our protagonist set to solve a brutal crime.

I’m not very far into this one so I can’t say much about the inspector but I really like the descriptions of characters and setting. I feel like I’m watching a black and white noir film.

Those are my latest reads. I haven’t done all that much reading this week what with being back at work, trying to work out, run errands, etc. So I’m very happy the weekend is almost here so I can get more time with my reads. Happy weekend everyone!