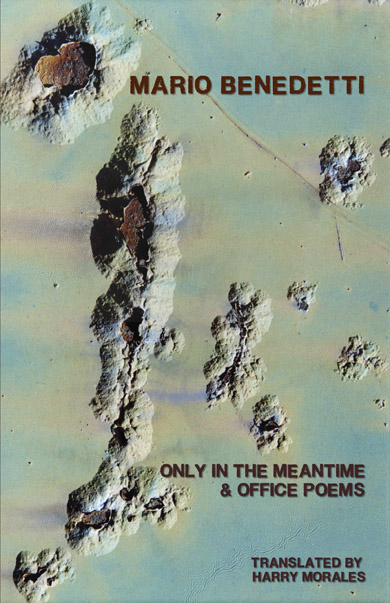 No, I haven’t been spending my lunch hour at work creating poems about staplers and post-it notes, although that does sound like it could be a fun challenge. Anyway, I’ve recently discovered poet, Mario Benedetti through Only In the Meantime & Office Poems.

According to the introduction in the collection, Benedetti is one of Latin America’s most well-known poets. Unfortunately for me, I had not heard of him but I was very happy to discover this collection which was written from 1948 t0 1956. The Uruguayan poet is well-known for his poems addressing everything from love, political struggles and even the struggles of the middle class office workers.

What I especially liked about this book is that it has the poems in Spanish and English side-by-side. I usually read the Spanish first and then see how the English compares. I’ve gone back to read a couple of the poems already because I have found a sentence or thought that really stayed with me. Here’s one poem I really liked:

Christmas Bonus
I’ve already added up my bills
and I’m not paying
anyone.

Not the tailor who made these lapels for me
like cock pigeon wings
or the poor grocer
who doesn’t sell me sugar
or the bank that hangs me
or the bookseller who complains
or destiny that surely doesn’t collect
the tender prayers
that I pay cash on delivery.

I’ve already added up my bills
and I’m not paying
anyone.

I’ll collect the Christmas bonus in one dollar bills
and I’ll go walking along Dieciocho
whistling a bitter tango
like another careless person.

You can read the Spanish version here – it’s Aguinaldo. Isn’t that great? How about you, have you discovered any new poems/poets lately?