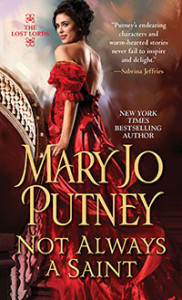 “He hated seeing women who had been beaten, usually by the men who were supposed to protect them. As he studied the new patient, his fatigue vanished. She was hunched over, her face obscured by a tangle of dark hair that was matted with blood on the right side.”

Not Always A Saint
By Mary Jo Putney

When Dr. Daniel Herbert enters society seeking a wife all he wants is a mature, sensible woman who will understand that medicine is his first love. He doesn’t care about the recent title and wealth he’s inherited and in fact, finds them a burden but he hopes he can leave the running of his estate to his wife and he can get back to tending to his patients.

What Daniel didn’t expect was to be taken in by the beautiful Jessie. Everyone notices her extraordinary beauty but Daniel knows that there is something else that draws him to her. The rumor mill of course isn’t kind and has already labeled her the Black Widow who is only looking for her next wealthy target.

Jessie doesn’t mind the looks or gossips what she cares about is finding protection for her and her daughter. It seems that most of her life men have not been kind to her. She is desperately in need of a husband but when she meets Daniel she recognizes him from her past. She is attracted to him but she is not looking for a saint and besides a saint wouldn’t have her with all of her past or would he?

This book is part of Mary Jo Putney’s Lost Lords series and while all books can be read as standalones for those following the series they’ll see some of their favorite characters make small appearances in the storyline. I have read several of her books and always enjoy her characters. She usually writes characters that stay with me and that I do look forward to reading about in subsequent books but this story felt like it wasn’t up to her usual standards.

I actually had a hard time finding Jessie a sympathetic character which is hard to believe given some of the situations she went through. Also on the opposite end, Daniel was a bit too good to be true and ultimately the romance didn’t sweep me off my feet. I can usually depend on Mary Jo Putney for a great love story so I will return for more and hopefully my next book will be more of what I’ve grown to expect.