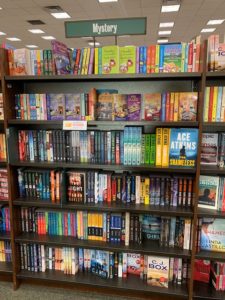 I went to my book group night on Tuesday and we discussed Auntie Poldi and the Sicilian Lions by Mario Giordano. I think it was a bit of a mixed bag for the group. Some didn’t care for the main character at all while others thought she was a great character. I wanted to like this one a lot more than I did but sometimes that happens right? Our next book to discuss will be The Awkward Squad by Sophie Henaff

While I was hanging around the bookstore browsing before our discussion I found a few other books either on the shelf or mentioned in magazines that were mysteries I wanted to check out. So here they are:

The Ghost Manuscript by Kris Frieswick. Rare books, a tomb and a secret that could rewrite the history of Western civilization. What’s not to love!

The Conviction of Cora Burns by Carolyn Kirby. A debut novel that delves into Victorian London’s dark underbelly and the question of where we first learn violence: from our scars or from our hearts.

One Small Sacrifice by Hilary Davidson. An apparent suicide. A mysterious disappearance. Did one man get away with murder—twice?

Let me know if you’ve read any of these or if you’re also got these on your wishlist. I hope you all have a wonderful weekend and more book talk soon!