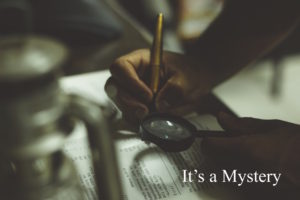 I’m a bit late in giving you a recap from my Mystery book group talk on Tuesday. We typically don’t read a lot of cozies but as we wanted a Halloween themed book for the month we discussed Hallowed Bones by Carolyn Haines. With the exception of a Black and Orange ball that takes place, this book really didn’t make you think it was Halloween.

It wasn’t a favorite book for our group but we had a good time talking about it and for a cozy we all thought it actually covered some serious themes. I’m also marking this one as a read for my R.I.P. challenge so I’ll try to get a quickie review up but no promises.

Now as we are talking about mysteries I thought I’d share some of the mystery books that I’ve read about or seen on the shelves that I’m adding to my TBR list. What do you think, have you heard of some of these?

In Sunlight or in Shadow, Editor Lawrence Block. For this collection authors were invited to write a story inspired by an Edward Hopper painting, and the results are diverse and mostly superb in this beautiful book, which has a full-page color reproduction of each painting.

Woman in the Shadows by Jane Thynne. Historical novel featuring Clara Vine, the actress and British spy in prewar Germany who maneuvers through the treacherous Nazi society gathering intelligence and discovering a deadly secret.

Victim Without A Face by Stefan Ahnhem. Two men are dead. Both had been bullies at school. A single clue has been found at the scene: a class photo, with two faces neatly crossed out.

Beloved Poison by E.S. Thomson. A richly atmospheric Victorian crime novel where murder is the price to be paid for secrets kept. This one has a lovely cover with the perfect typeface.

The Gloaming by Melanie Finn. A dark, intense novel of mystery about a woman, Pilgrim, who is fleeing the disaster that was her marriage, and, overcome with guilt after a horrible accident, runs off to Africa to lick her wounds. But when a body turns up and is suspected of being a curse created by witchcraft, she and the town’s citizens are set on edge trying to figure out the curse’s intended recipient. Not helping with matters is Pilgrim’s sinking feeling that she’s being followed.

I hope you’ve all had a wonderful weekend and here’s to a great week ahead!