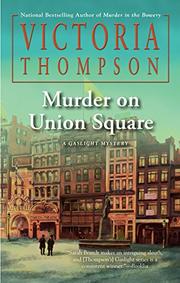 Summary: Sarah and Frank Malloy are enjoying married life and looking to make their family official by adopting Catherine, the child whom Sarah rescued and has been raising as her daughter. The process seems fairly straightforward, but at the last minute, the newlyweds discover that Parnell Vaughn, Catherine’s legal father, has a claim on the child, and his grasping fiancée is demanding a financial settlement to relinquish parental rights.

In this latest installment of the Gaslight mystery series Sarah and Frank are eager to formally adopt Catherine but it looks like first they’ll have to deal with Parnell Vaughn, Catherine’s legal parent. Parnell is willing to help the Malloy family but his fiancé feels he should receive some sort of payment. When Frank tries to see Parnell separately to speak with him, he’s arrived too late. Parnell is dead and no sooner has he called for help when he is being hauled off to jail.

Frank Malloy, now a private investigator, never thought he’d find himself accused of murder but as soon as he can post bail he is going to busy himself with finding who murdered Parnell. With the help of Gino, also a former policeman now working for Frank, Sarah and their nursemaid, Maeve, the four will be questioning the actors to find out who could have harmed Parnell.

They find that the theater group was losing money, their once loved star is getting older and not commanding as much attention and there are new actress who want to take center stage. Anyone could have had a grudge against Parnell and the Malloys decide to set up a trap to see if they can smoke out the killer of course this means reaching out to someone who helped them on a previous case.

This long running series captures the social customs of the bygone era with a lot of details but what has made this such a strong series are the characters. The interactions between Sarah and Frank are what kept me engaged and sadly I feel like we are losing a bit of the charm as the series continues. I like Gino and Maeve but they now have much larger roles and while I think Gino’s is warranted, I would prefer to see Maeve a bit more in the background. If you want to check out this series, I highly recommend that you start with the earlier books. As for me, I’ll probably be here for the next installment and hopefully we’ll have more chapters just focused on Sarah and Frank.