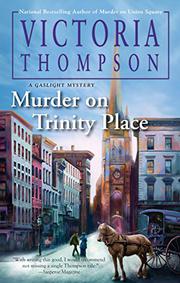 “We just need a dark-haired man to come in with a lump of coal and a few coins right after midnight to ensure us a prosperous 1900.”

It’s a festive time of the year and Frank and Sarah Malloy have been celebrating with their family and friends the arrival of the New Year. They attend a gathering at their neighbor, Mrs. Ellsworth’s, house and there they meet the parents of the Theda who’s recently married Mrs. Ellsworth’s son, Nelson. Before they meet the family Mrs. Ellsworth does warn them that Mr. Pritchard does tend to go on about milk being that he is in the dairy business.

Frank and Sarah notice that more than anything Mr. Pritchard seems to be obsessed and has some strange thoughts on the upcoming New Year celebrations. Once the Malloy’s leave for Trinity Church to see the festivities they are excited about the future but just as the crowds are celebrating they see Mr. Pritchard out trying to convince other people about his theories. They try to pull him away and take him back home but there are just too many people and they end up leaving without him.

The next morning though the body of Mr. Pritchard is found and Frank, who now owns his private detective agency, starts to look into the life of Mr. Pritchard and figure out why anyone would have anything against him.

I found the history of the milk wars very interesting and as always I think the author does a great job of setting up the scene and taking you to another era. It’s also exciting to see the years progressing for the Malloys and how they will adapt to the new changes. For example, they now have a car and it was quite funny to read about how fast it was going and how dangerous it all was.

This is the 22nd installment of this series and I’ve read them all. I loved the earlier books when Sarah was out being a midwife but unfortunately her role has changed a lot. She has set up a home for unwed mothers but she’s not out at all hours delivering babies. I’ve always enjoyed Mrs. Ellsworth her superstitions so it was nice to see her make an appearance in this book but where were the children? Malloy and Sarah have two young children and they barely made an appearance. If you are interested in this series I do highly recommend starting with the earliest books first so you can get to know the main characters better.