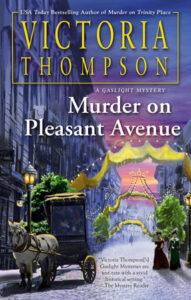 ” ‘The quick brown fox jumps over the lazy dog,’ ” Maeve whispered to herself, deliberately striking each key on the typewriter as she said it. Why had she thought working in Mr. Malloy’s private investigator’s office would be exciting? the first thing he and his partner, Gino Donatelli, had wanted her to do was learn to use the typewriter. She would never get the hang of this. She should have been content just being a nanny to the Malloy children.”

When a young woman is kidnapped from the area known as Italian Harlem, Frank Malloy and his assistant Gino Donatelli are called to investigate. In order to get more details from the voluntary group where the young woman was working, Maeve also joins in on the investigation and goes undercover.

It becomes evident that the Black Hand, an organized crime group, has been terrorizing the residents and when Gino Donatelli gets more involved and tries to look into matters on his own, he suddenly finds himself at the scene of a murder and he’s becomes the prime suspect.

Sarah, Malloy’s wife, also becomes involved in the investigation as she tries to learn more about the young woman and other women who have been kidnapped. Of course as Sarah digs into the background story she finds out the young woman may also be hiding other secrets.

This is the 23rd installment in the Gaslight Mystery series and as I’ve been saying about these latest entries, I feel like the witty banter we saw between Sarah and Frank at the start of this series is gone. Also, some of my favorite characters are almost non-existent. I realize that this book is so Gino and Maeve have their moment in the spotlight but it’s a shame that some of the other characters felt like an afterthought. Unfortunately a bit of a disappointment.