I just got home from going to the Ian Rankin book signing at one of local Borders. What fun that was although at first I wasn’t so sure it was going to be a good experience. The podium and 40-some chairs they set up for the reading was only a few steps away from another event, a live broadcast for some radio station. Hello? Who thought this was going to work. Luckily the radio folks packed up their gear and left pretty soon after the talk started.

Ian Rankin talked about his latest book, The Naming of the Dead, which has Inspector John Rebus tracking the murderer of a recently released criminal. Meanwhile, most of the other officers are trying to provide security for the G8 Summit. Oh wow, does this mean Rebus might get to meet George W. Bush and give him a piece of his mind?

The author also talked a bit about what it’s been like to write for the past 20 years the Rebus character. The next book he is working on is actually the ‘retirement’ book but he said he still has a lot of options for Rebus. He could “stop the clock” and just not let him age as he’s been doing since the series started, or he could have him retire and come back to provide assistance on special cases. Either way, I’m thinking Rebus still has a lot of work left to do. At least I hope so.

Well, Ian Rankin sounds like he’s a busy guy too. Aside from working on the next Rebus novel he’s also got a novella about an art heist set in Edingburgh and will be serialized in the New York Times starting on May 3rd. He is also working on a comic book for DC Comics and a libretto for a Scottish opera.

I got my book and stood in line for a good while and when I finally got to meet Ian Rankin I told him that I’d just discovered his books not too long ago and I had just finished reading Mortal Causes earlier this year. He said he hoped that I continued with the books as I haven’t even gotten to the good ones yet. Oooh…

Here’s my signed book! For any of you who like police procedurals I highly recommend this series. 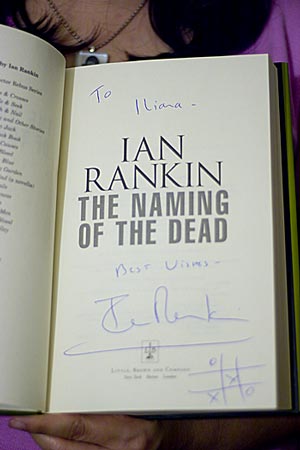