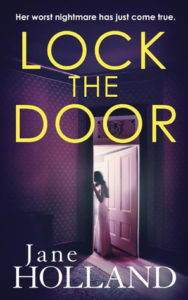 “The doctor said to treat him like any other child. Easy for her to say. Some nights I feel like he’s made of glass, especially when I undress and bathe him before bed. As though he might shatter at any minute. Seven months old this Saturday.”

Lock The Door
By Jane Holland

Every feeding, outing and moment of baby Harry’s life is carefully planned since finding out that he has a medical condition that makes him susceptible to infections which can be deadly. For Meghan and Jon this means their relationship has endured a lot of stress but for one evening everything finally seems to be going well as they celebrate their anniversary with their friends.

While baby Harry is sleeping in his bedroom the couples are enjoying the evening, drinking and being in the garden not in the least worried about Harry until the parents find out that Harry is no longer in his crib and has disappeared.

Meghan is scared an angry and she knows that every minute Harry is away could be life or death for him. The police question the parents and friends but there are few clues. The police fear that this is a case of a serial kidnapper.

There is tension right from the start in wanting to know what is wrong with Harry to being suspicious of almost every character in the book. I especially liked the parts where Meghan feels like she sees Harry and almost questions her sanity. I can imagine how that could happen in such a stressful situation.

This was an easy read but don’t feel like you’ll be in for a complex mystery. There was a good buildup of suspense especially towards the end but I didn’t buy the “why”. I thought the explanation was a bit too far-fetched.