Home
>
Nightstand
>
How Not to Die Alone 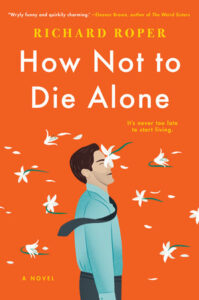 How Not to Die Alone
By Richard Roper
Source: Advance review copy

Andrew works for the Death Administration at a council in London and his job means that when someone dies alone, he has to go through their belongings to look for a relative, friend or someone who needs to be contacted. He also takes it upon himself to be at the funerals of those lonely souls.

While at his office Andrew’s co-workers think he has nothing in common with those lonely people because they think he has a loving wife and two children but that can’t be further from the truth. Andrew never meant to lie to his coworkers but a small lie became bigger and it’s hard to now tell the truth. What is he going to do with his boss iasking everyone to host dinners at their homes so they can meet their families and get to know one another more.

It’s going to be even harder to keep up with his lie because now he has a new coworker, Peggy, who is shadowing him as she learns about the job and she likes to talk a lot and Andrew likes to talk to Peggy too. It’s just that if he has to come clean about his past it means he has to face the tragedy he has tried to put out of his mind.

Andrew has one last solution. Maybe his only friends, the strangers from the model train forum he chats with regularly, will help him out of this mess.

Despite the title and Andrew’s work, this is really quirky and charming. I laughed a couple of times and was rooting for Andrew to break down the walls he put up around himself and learn to welcome friendship and love into his life.