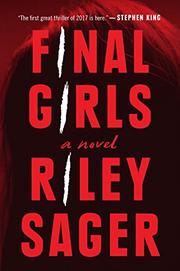 “The forest had claws and teeth. All those rocks and thorns and branches bit at Quincy as she ran screaming through the woods. But she didn’t stop. Not when rocks dug into the soles of her bare feet. Not when a whip-thin branch lashed her face and a line of blood streaked her cheek. Stopping wasn’t an option. To stop was to die.”

After the horrifying events at Pine Cottage 10 years ago, Quincy has finally built a “normal” life. She is a successful blogger, has a nice apartment and thinks she’ll soon be tying the knot with her boyfriend. So what if she still has to rely on Xanax at times to get her through the day? Lucky for her she can still also rely on her friendship with Coop, or Officer Cooper who rescued her.

Quincy joined the ranks of the “final girls” after surviving the massacre at Pine Cottage. Lisa and Sam are two other final girls, dubbed so by the media, because they were the sole survivors of similar situations. They each have found a way to cope with their pasts but Quincy has tried to distance herself and not think of herself as a final girl. She wants to move on but her life is going to be upended by Sam who finds Quincy and wants to talk about her past.

Sam is quite the opposite from Quincy. She lives a life with no rules and thinks that Quincy is not quite telling the truth about not recalling the events of the past. She challenges Quincy and while at first Quincy doesn’t want to engage in the risky behaviors Sam partakes in, at the same time she hasn’t been truthful about everything. She is slowly won over by Sam’s insistence and Quincy is discovering another side of herself.

The novel moves back and forth in time, slowly revealing what Quincy was like before the massacre at Pine Cottage as well as revealing the backgrounds of the other final girls. I liked the build up to the big reveal and thought that was really well done and kept the suspense high. My disappoint in this book came mainly in that it went in a direction I wasn’t expecting. In my mind, I had resolved it all in a great way and it didn’t pan out. So not really the story’s fault but it was me trying to get ahead of the story. Would I read another thriller by this author? Yes, absolutely.