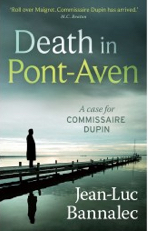 “Commissaire Georges Dupin was sitting in the Amiral, at the very end of the bar, the newspaper spread out in front him as usual… Dupin had spent his whole life amidst the glamour of Paris, but two years and seven months ago he had been ‘relocated’ to this remote backwater due to ‘certain disputes’ (as the internal memos had put it) and ever since then had drunk his petit café in the Amiral; it was a ritual as delightful as it was inflexible.”

Death in Pont-Aven
By Jean-Luc Bannalec

Commissaire Dupin’s morning ritual is disturbed when he is called out to a crime scene at the town’s hotel. The owner, Pierre-Louis Pennec, was found dead in the restaurant part of the hotel.

Who could have wanted the ninety-year-old killed? It just doesn’t make sense that a crime could occur in the idyllic village but as Dupin and his team begin their investigation they uncover secrets from the Pennec family that could shake the art world and could cause someone to commit murder.

Dupin has a list of suspects who could all benefit from the death of Mousier Pennec and with the help of an art historian he will get to the bottom of the case, of course, not without causing a bit of a stir with his colleagues.

If you are looking for a fast-paced thriller, put this book down. But, if you want to feel like you’ve just been on a guided tour of picture postcard Brittany then settle down with some coffee, a croissant and enjoy the scenery that the author describes. A very enjoyable mystery and one that I hope will followed by more adventures.