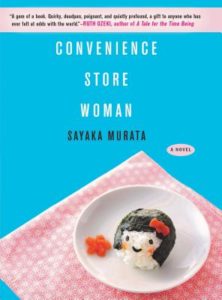 “A convenience store is a world of sound. From the tinkle of the door chime to the voices of TV celebrities advertising new products over the instore cable network, to the calls of the store workers, the beeps of the bar code scanner, the rustle of customers picking up items and placing them in baskets, and the clacking of heels walking around the store. It all blends into the convenience store sound that ceaselessly caresses my eardrums.”

Keiko Furukura has always been a bit different. She doesn’t quite get the social clues to navigate being around others, even though her family tries to help her understand how relationships work. It isn’t until she finds a job at the Smile Mart convenience store when she’s eighteen that she finally feels like she’s found her place.

Following a manual that tells you how to deal with the different type of customer interactions makes life much easier for Keiko. She starts to emulate the phrases and dress of other workers and now daily interactions aren’t the landmines of the interactions she’s had in the past where people have always found her to be odd.

The years pass though and now she’s been working at the Smile Mart for 18 years and when she gathers with some family friends she realizes that everyone is moving on with their life but she’s still at Smile Mart. She hasn’t gotten married, she’s still a cashier but those are questions it seems others have for her. She’s been content with her life so far right?

Her life does end up going a bit topsy turvy when a co-worker, Shiraha, moves in with her after having been fired. His character is in you face and frankly intimidating but at times it felt like he was just rebelling against what people expected him to be like.

At first the novel can come off as light and breezy but the more I think about it, the more I found myself thinking about the effects of social pressures and what it means to be normal. I found the setting to be unique and so vividly described that I also wanted to wander around the aisles looking at the specials and different offerings from what we have in the States. I loved the observations and thought this book was a great addition to my shelves.