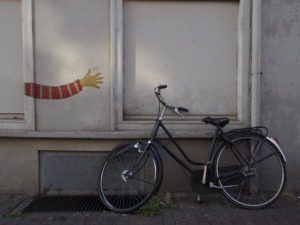 Thank goodness for the presentation we went to on Saturday by one of the creators of Pedal South. With so many news coming out that make me think the world is not headed in a good direction, it was so nice to hear about this project. Four friends cycled the Pan American Highway from Alaska to Argentina and even when they found themselves at their most tired or vulnerable they still thought the trip was worthwhile.

Why do this trip? Because they wanted to discover the beauty of the places and their people. They were witnessed great acts of kindness and as Ricardo shared various stories I kept thinking how there is a lot of goodness in this world and we just need to remember that and fight for it.

Now can you imagine cycling that many miles? I think my husband started getting ideas. Haha…

Anyway, I also went to the library to pick up a couple of books that I had on hold. Here are my books:

Glaxo by Hernan Rosino. This is supposed to be a chilling novel of betrayal, romance, and murder, from a major Latin American writer being published in English for the first time. It is set in a derelict town in the Argentine pampa.

A Small Death in the Great Glen by A.D. Scott. In the Highlands of 1950s Scotland, a boy is found dead in a canal lock. Two members of the local newspaper staff set out to investigate the crime.

A Thousand Naked Strangers by Kevin Hazzard. A former paramedic’s poignant and mordantly funny account of a decade spent on Atlanta’s mean streets saving lives and connecting with the drama and occasional beauty that lies inside catastrophe. I wanted a nonfiction read and when I found this I thought it sounded interesting but to be honest I’m not sure if I’m really in the mood for this one now. Have you read it?

Have you checked out any books lately? And, how was your weekend?