Didn’t mean to be away from the blog but I’ve been having some technical difficulties. All is getting sorted out but don’t you hate it when that kind of stuff happens? Anyway, with all that going on I sort of lost track of what I wanted to write about next. 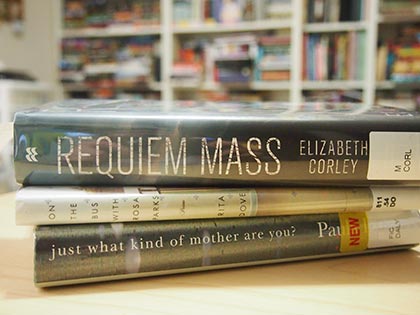 I still want to tell you about some recent reads but that’s going to have to wait until another time. I did go to the library earlier this week to pick up some holds so how about I tell you about those instead?

The first book is Requiem Mass by Elizabeth Corley. I love finding a new mystery series, however now that I’ve looked through this book some more I am not sure if this is the first book in the series featuring Detective Chief Inspector Andrew Fenwick. If anyone knows please clue me in will you!

Next up is On the Bus with Rosa Parks by Rita Dove. I’ve already read one poem that I think will become a favorite. It’s The First Book. Have you read it? These are the first lines:

Open it.
Go ahead, it won’t bite.
Well… maybe a little.
More a nip, like. A tingle.
It’s pleasurable, really.

Don’t you want to read the rest of the poem? You can go hear to listen to a reading.

The last book I checked out was Just What Kind of Mother Are You? by Paula Daly. A debut about motherhood, marriage and friendship.

So that’s the scoop over here. Anyone have big plans for the weekend? I want to catch up on my blog hopping, do some bookbinding (because I may do a craft show next month), and of course read. Hope everyone has a great weekend!