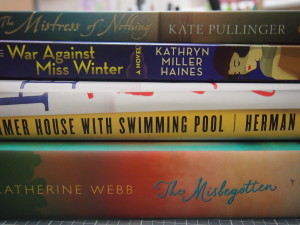 I have a mini book haul to share. I hadn’t been to Half Price Books in a while and decided to stop in on the weekend and I also went to Recycled Reads so although I bought five books these were a total bargain. I think I spent $20 in all.

Here’s what I bought, excluding a book for my husband which he’s already moved to his nightstand.

The Mistress of Nothing by Kate Pullinger. The American debut of an award-winning novel about a lady’s maid’s awakening as she journeys from the confines of Victorian England to the uncharted far reaches of Egypt’s Nile Valley. I read a book with somewhat of a similar premise last year and really loved it so I have high hopes for this one.

The War Against Miss Winter by Kathryn Miller Haines. It’s 1943, and the war escalating in Europe and the Pacific seems far away. But for aspiring actress Rosie Winter, the war feels as if it were right in New York City—what with food rationing and frequent blackouts. This sounds like a great historical mystery.

Summer House With Swimming Pool by Herman Koch. When a medical procedure goes horribly wrong and famous actor Ralph Meier winds up dead, Dr. Marc Schlosser needs to come up with some answers. After all, reputation is everything in this business. Last year I read Kochs’ book, The Dinner, and it was one of my favorite reads of the year so I’m really looking forward to this one.

The Misbegotten by Katherine Webb.  Rachel Crofton escapes her unhappy employment as a governess by marrying a self-made businessman. But her new life soon takes an unexpected turn. Another historical novel which I think will be a great read. I read Webb’s The Unseen a few years ago and it was a favorite.

So that’s what I got. Of course wouldn’t you know it, in our mailbox yesterday I have a coupon flier for Half Price Books. I will be going back for sure. So what books have you bought lately?