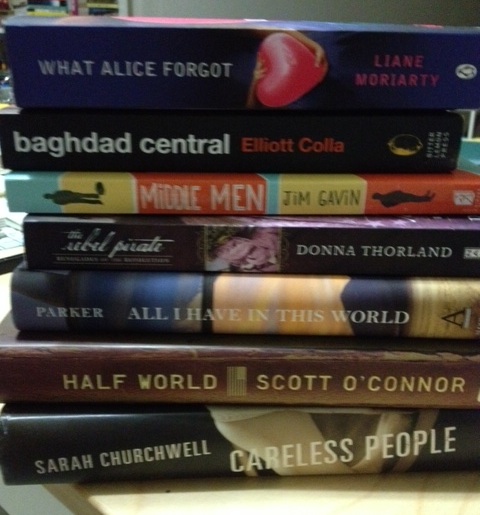 My mailbox has been overflowing lately and I wanted to share some of the books that have arrived recently. I wish I could dive into these right now but you know how it is.

What Alice Forgot by Liane Moriarty. Alice wakes up on the floor of the gym with a nasty bump on her head and worst of all realizes that she’s lost 10 years of her life. What has happened to the girl she once was?

Baghdad Central by Elliott Colla. From Bitter Lemon Press a crime story set in Iraq in 2003. I’ve not read any book set in Iraq so I’m really looking forward to this one.

Middle Men by Jim Gavin. A collection of short stories of men stuck in the middle  between their dreams and their realities.

The Rebel Pirate by Donna Thorland. This is the second in the Renegades of the Revolution series. I don’t read many series which are not mysteries but this sounds promising. A young woman is caught in a scandal and must save herself and secure her family’s future.

All I Have In This World by Michael Parker. Two strangers meet over the hood of a used car in Texas. The two strangers will form an unexpected friendship.

Half World by Scott O’Connor. A literary thriller that vividly imagines a world were the citizens are under government mind-control.

Careless People: Murder, Mayhem, and the Invention of the Great Gatsby by Sarah Churchwell. A unique literary investigation that reconstructs the farcical inquiry into a gruesome crime, as well as a passionate, scrupulous search for the roots of America’s best-loved novel.

So have you heard of some of these? Read any of them? I think part of my weekend plans will be to make room for these on the shelves. And, stay tuned for a giveaway I’ll post about tomorrow!