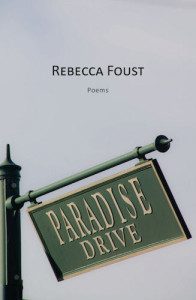 Paradise Drive by Rebecca Foust links 80 sonnets in a narrative about a modern Pilgrim on a journey from rust belt Pennsylvania to the glittering suburbs of Marin County, California. The book takes great pleasure in questioning, tinkering with, and ultimately exploding the sonnet form. It has been well received, with more than 50 reviews and features since its release last April. Rumpus and the Washington Review of Books included it in their National Poetry Month picks, and the San Francisco Chronicle recently published this review.

Watch this video for an interview with poet Rebecca Foust at the Marin Poets Live! show presented by the Marin Free County Library:

In addition you can listen to a reading at The Cortland review:

About the author: Rebecca Foust was the 2014 Dartmouth Poet in Residence and is the recipient of fellowships from The Frost Place, the MacDowell Colony, and the Sewanee Writer’s Conference Her fifth book, Paradise Drive, won the 2015 Press 53 Award for Poetry. Her other books include All That Gorgeous Pitiless Song (Many Mountains Moving Prize), God, Seed (Foreword Book of the Year Award) and two chapbooks that won the Robert Phillips Chapbook Prizes in 2008 and 2009. Foust’s poems appear widely in journals including American Academy of Poets Poem-A-Day series, Hudson Review, Massachusetts Review, Poetry Daily, Sewanee Review, and Verse Daily. A first generation college graduate, Foust attended Smith College (BA 1979), Stanford Law School (1979), and Warren Wilson College (MFA 2010). She lives in Northern California and works as Poetry Editor for Women’s Voices for Change and assistant editor for Narrative Magazine.

Visit Poetic Book Tours for more about Paradise Drive and to follow the blog tour.