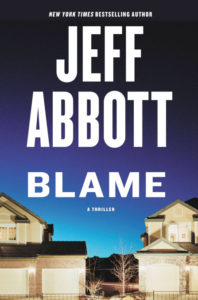 “Two Years Ago. What she would never remember: their broken screams starting with I love… and I hate…, the sudden wrenching pull, the oh-no-this-is-happening-this-can’t-be-happening feeling of falling as the SUV rocketed off the road, the horrifying downward slope of the hillside in the headlights, his hands tight over hers on the steering wheel, the smashing thunder of impact, the driver’s-side airbag exploding in her face, the rolling, the lights dying, the unforgiving rock, and then the blow to the head that undid her and wiped her clean and made her new.”

An electrifying opening for a novel with plenty of twists. Jane Norton is driving with her friend when their car runs off a cliff. David doesn’t survive and Jane has lost all memory of the accident. Immediately following the accident everyone is sympathetic to Jane’s injuries but when a note is discovered, in Jane’s handwriting, stating that she wanted to die, the wave of sympathy turns and Jane is ostracized from the community.

Jane still lives next door to David’s parents but it is clear from any interactions she has with the family that they wish she didn’t live there and her high school friends have turned their backs on her. Jane wishes she could remember the details of the accident and what led to them being out on the road at night. She can’t imagine writing the note and much less wanting David to die.

As if that weren’t enough she is now being harassed by someone online claiming they know what happened and that someone will pay. Who is this poster calling themselves Liv Danger and what do they know? If only Jane could remember but she has her hands full trying to maintain her sanity.

Good pacing in this novel that made you want to keep turning the pages. There were a lot of characters that weren’t trustworthy but kept the reader guessing as to what their agenda could be. The only thing that detracted me a bit from the story line was that this story was set in Austin, Texas. Being that I live in Austin, made up streets and places stood out to me and seemed a bit jarring.