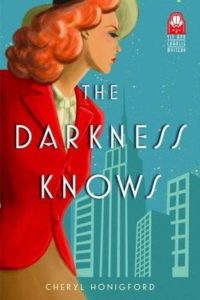 I’m very excited to introduce to you Cheryl Honigford, author of The Darkness Knows. This is her first book in the the Viv and Charlie Mystery series. Today I have a short Q&A with Cheryl so I hope you’ll enjoy!

Q: Introduce us to your series lead, Vivian Witchell.
A: Vivian plays the sidekick in a popular detective serial, The Darkness Knows, broadcast weekly from WCHI in Chicago. This role is a big break in her career, and she’s determined to make the most of it and become a star. She’s spirited and smart and not about to let a little murder get in her way.

Q: Why did you choose 1938 Chicago as the setting for your new series?
A: Radio’s heyday was during the 1940s, hitting its peak during WWII (roughly 1940-1945). I wanted to set the start of the series just prior so that, historically, there would be something to build up to. I picked October 1938 specifically because that’s when Orson Welles’ War of the Worlds aired. (The War of the Worlds radio broadcast is what got me interested in old time radio in the first place, so I wanted to incorporate it somehow into the story.)

Q: Historical crime fiction involves a lot of research, what did you learn as part of your research? Any interesting surprises?
A: A lot of the most interesting things I learned about radio are included in The Darkness Knows. There were women that specialized in screaming so the lead actresses didn’t ruin their voices (used as Vivian’s break into acting). There were also women that specialized in crying like babies or played children’s roles. Children’s roles were also sometimes filled by midgets – since they were adults with high-pitched voices and more reliable than using actual children.

There are so many places I discovered in my research that no longer exist in Chicago that I actually sketched out my own map of the Loop with where buildings used to be in 1938. Hotels, department stores, restaurants, etc… Probably a bit over the top for the purposes of my book, but Chicago’s history is so interesting to me!

Q: What was the hardest part about writing The Darkness Knows?
A: For a mystery you really have to know the beginning and the end before you can flesh out the middle. Once you’ve decided on the murderer you have to make sure to throw in red herrings and false leads along the way. You can’t do that until you have characters and scenes established to add the red herrings about. It’s complicated – a bit like creating a puzzle and solving it at the same time.

Q: What’s next for you and your character?
A: Book #2 (coming in October 2017) is set a few months after The Darkness Knows – at Christmastime 1938. Vivian stumbles upon something that flips everything she thought she knew about her beloved (and now deceased) father on its head. Expect more radio station intrigue (especially with Vivian’s star on the rise) and more historic Chicago detail woven throughout. And of course, Charlie is involved. I’m working on Book #3 at the moment.

Q: What fills your time when you are not writing?
A: I’m a working mom so that pretty much fills up every minute that I’m not writing. Really, it’s the other way around, I suppose. Writing gets squeezed in around everything else. I love reading. I love history. I also love doing crafty things – knitting, crocheting, baking, photography, etc…  though it’s hard to find any time for those things these days.

Thank you Cheryl for taking the time to answer my questions! I know I’m looking forward to reading about Viv and Charlie.

Now for the giveaway… Sourcebooks is is kindly giving away a copy of the book to one winner. I hope I’ve peaked your interest so leave me a comment and I’ll do a drawing for the book and announce at the end of August. Good luck!