Home
>
Nightstand
>
At The Book Festival

I had such a great time at the Book Festival this weekend. I think the only bad thing was that there were so many good sessions to go to that I hardly had a chance to eat so I was starving although I did sneak in a Luna Bar at one point. I’m such a rebel – heh.

The first session I went to was Michael Dirda’s Reading the Classics for Pleasure. He spoke so eloquently and with so much passion about reading the classics that I swear I left his session wondering just which classic story to read next. I think what was surprising to me is that he wasn’t just saying read Ulysses or Moby Dick or some of those classics but he also mentioned writers like Georgette Heyer and H.P. Lovecraft. Writers who have had an influence through their works. I must get Dirda’s book.

Next I went to hear Kathleen Kent talk about her book The Heretic’s Daughter. I’ve heard so much about this one via blogs that I thought I knew everything about it but what was so great about listening to her was to hear about her research on her book. I felt like we had a mini history lesson on the Salem Witch trials. It was absolutely fascinating.

Funny thing as I was leaving this session I ran into a friend from one of my book clubs in Dallas! We only chatted for a while because we were each rushing off to different sessions.

Then I sat in on David Ebershoff’s talk on his book The 19th Wife. Again, this is another book on my radar which I’ve heard about a lot via book blogs and the recent TLC Book tour but it was so interesting to hear him talk about his time in Salt Lake City doing some initial research and how he was practically run out of one town.

After this it was time for some Thrillers. I heard a panel of authors (Martin Clark, David Liss, Joe Landsale and Christopher Reich) talking about their start and the roadblocks along the way to their successes. I actually thought this was going to be more about mystery writers but it was still interesting. I’ve not read anything by these authors – anyone want to recommend one of their books?

Finally, I almost didn’t go to the last session because I was getting kind of tired but I’m so glad I made it to the session hosted by Vintage/Achor Books. On the panel were Ann Packer and Daniel Wallace talking about book groups, their books and their writing. They were very witty and it was so fun to listen to them. I’ve read one of Ann Packer’s books but I’m definitely looking forward to her new book, Songs Without Words.

The Vintage/Anchor team also handed out these cool black book bags with some free books! I got The Senator’s Wife by Sue Miller, The World According to Bertie by Alexander McCall Smith and Peace by Richard Bausch. 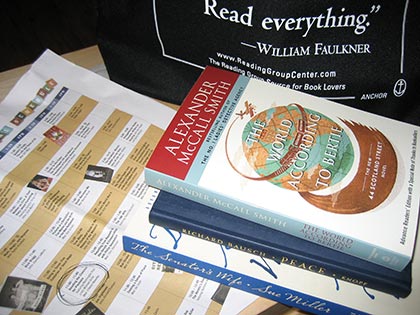 Perhaps the only downside to the festival is that when I left I had an overwhelming sense of “I want to read everything NOW.” You know how that goes. Anyway, lots of fun and now I want to read books by these authors and of course, I’m already looking forward to next year’s festival.