Home > Book Reviews > Nightstand > After You 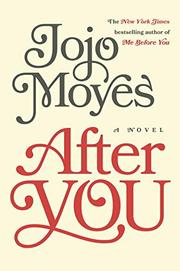 “When I first moved down here, when it all first hit me hardest, I would sometimes dare myself to walk from one end of my block to the other. When I reached the other end I would laugh into the night air. You see? I am here – staying alive – right out on the edge. I am doing what you told me!”

After You
By Jojo Moyes

Well Louisa Clarke is not really doing what Will Traynor told her to do. Sure after his death she traveled to Paris but her grief was overwhelming and she’s going down a path that is not healthy. She is back in England, London this time. She seems to be cut off from family and friends. The only thing she has going for herself is her job at an airport pub, and that’s not going very well either.

After an accident Lou is forced to stay with her parents while she recovers and to make her parents and herself feel better she joins a grief counseling group. As people go around the room telling their stories, she can relate but still wonders what she is doing.

Finally when a young woman enters her life claiming to be Will’s daughter, Lou thinks she may have found something to live for but it’s not going to be easy getting to know Lily. The teenager is going through a rough time in her life, which unfortunately translates to a very unlikeable character. Why Lou feels so compelled to help her is beyond comprehension.

For most of the book Lou is depressed and just a former shell of her old self. Hard to believe this is the same character of Me Before You. It is understandable that she would be sad but once again I wonder why a sequel was necessary. I’ve enjoyed several of Jojo Moyes books but this was not one of my favorites. The scenes I did enjoy were actually about Lou’s mom in her quest to become a feminist. That led to some cute and humorous scenes of her mom and the rest of the family.