I used to do these quick little posts and I realized it’s been a while since I posted a happiness post. I think especially right now it’s good to remember all those little things that bring me joy and maybe you’ll want to check them out too.

A refreshing drink. I don’t like plain mineral water but I realize I really like it when it has a flavor. This has become an afternoon favorite.

Cherries. Another favorite snack and just look at all the health benefits.

I also love enjoying a cold brew during the hot summer days. I’ve tried a lot of brands but Stok is so far my favorite.

Have you heard of Relax Melodies? I’m hooked on these. I love taking a nap with the soft sounds of a river or rain in the background. I listen to these at least 2 -3 times a week.

My husband surprised me with the Breathe: Puzzle and Games Special edition magazine. I enjoy crosswords but don’t really do the other puzzles but this magazine has some really cute graphics and articles. So it has ended up being a fun discovery.

Finally, I just heard that the Texas Book Festival is going virtual this year. I’m so glad that the organizers are not going to let the pandemic keep them from bringing good reads to Texas.

Would love to hear what is bringing you joy lately. Have a wonderful weekend! 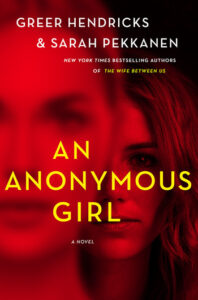 “A lot of women want the world to see them a certain way. It’s my job to create those transformations, one forty-five minute session at a time. My clients seem different when I’ve finished helping them. They grow more confident, radiant. Happier, even. But I can only offer a temporary fix. People invariably revert to their former selves. True change requires more than the tools I wield.”

Jessica is a make-up artist living in NYC and her job is going out to clients to do make-overs. When she is at a college dorm helping a young woman get ready, she finds out about a psychological study. She could really use some extra money so she takes a chance and sneaks into Dr. Shield’s study on ethics and morality.

Surely a couple of hours sitting through some online questionnaire is worth it but as Jessica is answering the questions she thinks some of them are too intrusive. Still the promise of additional compensation makes her take a chance on an extended study.

When she meets the enigmatic Dr. Shields, Jessica is eager to please. She’s got a sister who is ill and she wants to provide care for and her dad is soon out of a job. However the more she time and confidence she gives to Dr. Shields, the more she wonders about the nature of the study. Something doesn’t seem to add up.

Dr. Shields is very smart and she’s manipulative. She can see that Jessica may be starting to mistrust her but she’ll find a way to keep Jessica her subject, even if it means blocking Jessica’s job opportunities so she’s completely dependent on her being part of her study. Dr. Shields will get to the bottom of what she needs to find out about the real Jessica and her intentions.

Told from dual view points, the reader can find sympathy with Jessica’s need to continue working with Dr. Shields but at the same time you want to yell at her and say, Jessica run get out of that toxic situation. It was actually bit harder to buy into Dr. Shields need for the study and the lengths she was willing to get the information she needed. Still this was a breeze to get through and for fans of psychological thrillers this would be worth checking out.

It’s been quite a while since I joined Top Ten Tuesday but I remembered to look at the suggestions in time to put together this post. Top Ten Tuesday is hosted by That Artsy Reader Girl and every Tuesday she has a new topic to get you thinking about books and all things bookish.

This week’s topic is: Books With Colors in the Titles. To challenge myself a bit more I went to my shelves to see if I could pick out ten books.

Death of a Red Heroine by Qiu Xiaolong. A young “national model worker,” renowned for her adherence to the principles of the Communist Party, turns up dead in a Shanghai canal

Blood Orange by Harriet Tyce. Alison has it all. A doting husband, adorable daughter, and a career on the rise–she’s just been given her first murder case to defend. But all is never as it seems…

Half of a Yellow Sun by Chimamanda Ngozi Adichie. If you haven’t read this book add it to your list! It’s a wonderful story about Biafra’s struggle to establish an independent republic in southeastern Nigeria during the late 1960s.

The Land of Green Ginger by Winifred Holtby. Joanna Burton, a missionary’s daughter, grows up dreaming of the far-off lands she will visit, of grand adventures to come.

The Mystery of the Blue Train by Agatha Christie. When the luxurious Blue Train arrives at Nice, a guard attempts to wake serene Ruth Kettering from her slumbers. But she will never wake again.

The Secret History of the Pink Carnation by Lauren Willig. Realizing romantic heroes are a thing of the past, graduate student Eloise Kelly is determined to focus on her work. Her first stop: England, to finish her dissertation on the English spies of the Napoleonic Wars

Eight White Nights by Andre Aciman. A young man goes to a Christmas party in upper Manhattan where a woman introduces herself with three simple words: “I am Clara.” Over the following seven days, they meet every evening at the cinema.

The Silver Gun by L. A. Chandler. An Art Deco mystery set in New York City, 1936. Those in City Hall know that tumultuous times can inspire both optimism and deadly danger . . .

The Black Minutes by Martin Solares. When a young journalist is killed, the investigation into his murder reveals missing links in a disturbing multiple homicide case from 20 years earlier.

Let me know if you’ve read any of these. If you also participated in this I’d love to see your colorful list!